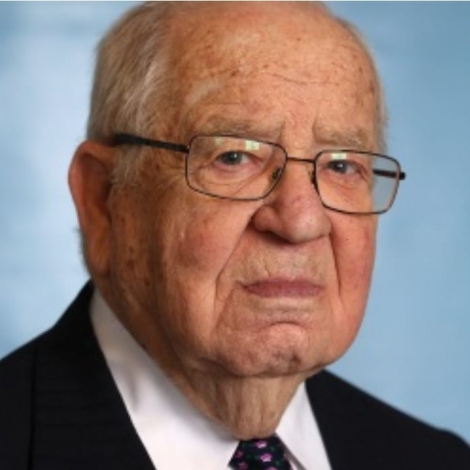 Professor Emeritus Mordechai Eliav passed away in September at the age of 96. Professor Dan Michman wrote the following in his memory:

I have known Professor Eliav for half a century. I was a second-year student of Jewish history at the Hebrew University and my father, the late Dr. Yosef Michman, initiated the establishment of the institute for the study of Dutch Jewry. He was looking both for scholars who researched the Dutch community, and for students who could collect and process the documentation. Prof. Eliav was working on his book on Love of Zion and the German Jews, which was published three years later (and which is one of the most use-tattered books in my library). Although his main interest was the contribution of the Jews of Germany to the settlement of the Land of Israel in the 19th century, a topic on which he contributed many important studies, in this case he also wished to include the Dutch angle. He studied the merchant organization that funded the Dutch-German kolel in Jerusalem, which was centered in Amsterdam. My father made him a member of the institute, and he gave lectures and published in the institute’s series of studies on Dutch Jewry. As a student who was just beginning his study of Dutch Jewry with my father, I met him often in the dark rooms of the central archive of Jewish History in the cellar of the Popick building at the Givat Ram campus, often together with Prof. Shimon Schwartzfuks.

Several years later, in the mid 1970’s, as I was finishing my PhD and looking for a permanent position, it was Prof. Eliav, who was in charge of the modern period in the department of Jewish History at Bar-Ilan, together with the head of the department Prof. Moshe Ber, who decided to give me a position – and to steer me into the study of the Holocaust. Shortly after my arrival in 1976 it was again Prof. Eliav who “forced” me to give a public lecture on the Tenth of Tevet Holocaust Memorial Day. That lecture was published two years later in a collection of studies on the Holocaust edited by Prof. Eliav, and that was my first published article on the Holocaust. During my first years in the department I served as his assistant, and learned from him. I will not surprise anyone when I state that he was critical and extracting, with colleagues, students – and assistants. And I must add that this was all because of his love of scholarship and his commitment to scientific precision and to the responsibility of a scholar to his topic and to his readers. He hated sloppiness and set high standards. I learned this from him. I owe Prof. Eliav a great debt for his influence on my development as a scholar.

But Professor Eliav’s main contribution was not to me personally. His main contributions were to the study of the history of the Jews of Germany, Austria and the Jewish settlement in the Land of Israel, especially Jerusalem. He wrote a number of ground-breaking books on these topics. His 1960 book, based on his dissertation, on Jewish education in Germany during the haskala and emancipation is a basic book to this day, both for German-Jewish history and for the study of modern Jewish education. In his books about Jewish settlement in the Land of Israel in the 19th century he described the development of society, especially in Jerusalem. He also described the foreign consular activity in Jerusalem in the 19th century, and in general showed the centrality of Jerusalem to the Jewish and non-Jewish world, even before the rise of Zionism. Not long ago he received an award from the City of Jerusalem in recognition of his contribution.

Professor Eliav joined the department in the 1960’s, not long after the foundation of Bar-Ilan University, and eventually served as head of the department. He influenced the development of the curriculum, was responsible for the recruitment of some outstanding people, and directed the work of several graduate students, some of whom are still in the department, such as Prof. Gershon Bacon, Prof. Yaron Harel and Prof. Moshe Rosman. He was also active in the faculty and in the university senate, and in the Israel Historical Society and Yad Ben-Zvi.

Professor Eliav was a dedicated Zionist. He was a member of the founding generation, one of those who laid the foundations of what we have today. Because of his dedication to the future of the Jewish People, he considered its past, especially its recent past, so important. The modern roots of education, enlightenment, Torah and Derekh Eretz, love of Zion and Zionism – all of these were important to him as parts of Israeli society. In the 1950’s he was active in the youth and education department of the World Zionist Organization, and was able to influence Jewish education in Diaspora communities as well.

He also felt the great pain of the Holocaust. After the Holocaust he was active in education among the survivors and in bringing them to Israel. In the 1960’s he edited the book Ani Ma'amin, published by Mosad Harav Kook, which included sources and testimony of people of faith during the Holocaust. This was a groundbreaking book which became a basic sourcebook and was used widely within the religious-Zionist public – such as in Bene Akiva – and beyond, in Holocaust memorial ceremonies, and was published in several editions since.

Professor Eliav passed away after a long life, leaving future generations a legacy in writing and in teaching, from which people who did not know him in person will be able to continue to learn. May he rest in peace.